What's on your mind?

I have the best way to win.

Just simply get the Orange, Yellow and Dark Blue to win.

I won a game of Monopoly with my two younger siblings.

Alright, so I randomly came across a lone dark brown hotel piece in the street. Unfortunately, I can not find which edition it is from. I contacted Hasbro to no avail. I have found one online listing to buy a collection of them that is labeled NOS. Does anyone have any idea to which set this piece belongs? 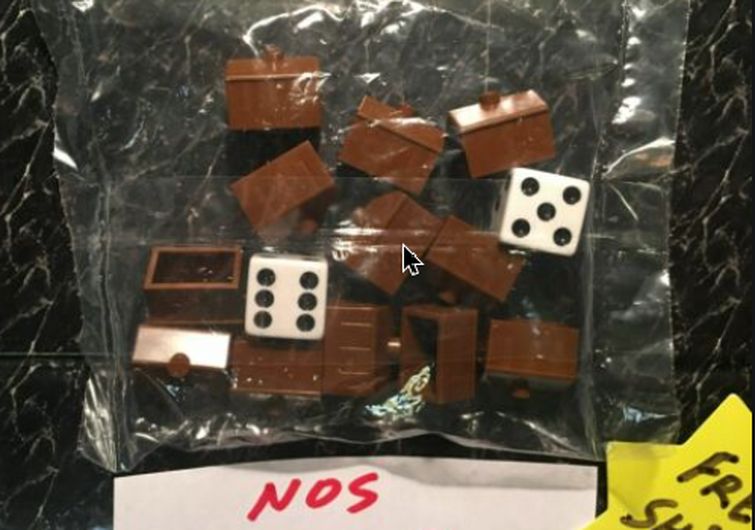 This is a picture from the online listing!

I have the family guy collector's edition monopoly and I keep getting asked if it's a genuine licensed version. How do I find this out????

Monopoly (when it is not known as “that game I will never play with *him* or * her* again”) is known as “The Real Estate Trading Game”. The importance of negotiation is much of what separates Monopoly from other games. Unfortunately, luck is also important in Monopoly, which may appeal to some less knowledgable players, but can be frustrating to those more experienced.

Taking luck out of the game forces players to rely on their negotiation skills, strategy and understanding of the various property values. While the nostalgia of playing the regular rules is appealing, especially when laced with family-based “house” rules, what makes Monopoly unique–negotiation and people skills–can be lost to mere chance.

There are many strategies for taking luck out of Monopoly. They can be added piecemeal to a regular game, or used in toto, to create a truly intense personal dynamics experience.

Rather than rolling dice to determine playing order, auction the order. Starting with who goes first should work best, then auction the other positions in order. You should probably rearrange seating according to the results.

Moving Around the Board

This is the most important aspect of taking luck out of the game. Rather than throwing dice, allow each player to decided, with limitations, his or her moves. One way to limit such moves is to distribute playing cards to the players to record their moves. The number of spaces moved would correspond to the card value: Ace = 1 through King = 13. A card played cannot be played again, until all cards are played, at which point, the sequence starts again.

Cards distributed might be limited, e.g., to only one suit, or taking out Aces and Kings, to more closely simulate rolling dice. Note this also eliminates “doubles”, an important element of chance in the regular game.

The ability to choose one’s moves makes playing order particularly important; indeed, each move might be auctioned as the game proceeds, or playing order might be re-auctioned at various intervals, determined, e.g., by time passage, when the last player passes Go in a particular round, or after an established number of turns.

Apart from memorizing what cards have been played, Chance and Community Chest are entirely random, i.e., based in luck. While it is possible to take the cards from the board, the spaces remain. They can be treated the same as Free Parking, or for a faster game, they can be skipped, as if they aren’t even on the board.

The Taxes are non-negotiable, i.e., they are irrelevant to Monopoly’s primary activity: negotiation; therefore, they can be treated the same as Chance and Community Chest. Similar consideration might be given to the other non-property board locations, Just Visiting/Jail, Free Parking, Go To Jail, and Go.

Implementing one or more of these rules may shorten the game, perhaps more than some players might like.

To enhance negotiations, some players allow for “free passes” and “immunity”. Under such agreements, players agree to discount or refrain from collecting rent on a property or monopoly for a set number (including fractions) of landings (free passes) or permanently (immunity) for a certain player. Such agreements are usually associated with trade negotiations.

Another strategy for shortening the game is rounding rents to a certain amount, e.g. $20. Anything less than $10 is not collected.

Adopting one or more of these strategies should reduce some of the frustrations of playing a regular game, while maintaining or even enhancing the aspects of Monopoly that make it popular.

If you reference this post elsewhere, I will appreciate an acknowledgement. John R. Harding, Jr.

What do you think are the most disregarded Monopoly rules and/or rules you disregard or have disregarded?

I am taking a guess that auctions are the most disregarded rule among common Monopoly players.

@Sings-With-Spirits @Isabella and the Lego Liker

Are things still working as intended after the UCP migration?

In the game of Monopoly, let's say:

- Player A has $1, many mortgaged properties, no other assets, and their game piece is situated on Mediterranean Ave.

- There are other players in the game, not relevant to this question.

Player A rolls a 1-1 and moves from Mediterranean and lands on Baltic Ave, owing Player A $4. At this point, Player A goes bankrupt, giving Player B the $1 and all their mortgaged properties.

According to the rules, Player B owes money on the just-acquired mortgaged properties from Player A because, "the new owner must at once pay the Bank the amount of interest on the loan, which is 10% of the value of the property." But, because Player B only has $1, and mortgaging Baltic will only yield another $30, Player B does not have enough assets to pay the 10% on all the mortgaged properties she just acquired from Player A.

So, is it true that according to the rules, it is possible for Player A's bankruptcy and transfer of mortgaged properties to Player B to additionally result in Player B's bankruptcy as well?

Hey, guys. I've been thinking that Winning Moves should release more versions of Monopoly: The Mega Edition. You know like for movies, cartoons, etc. What special versions do you think they could make?

I purchased Bunnings Monopoly for my grandsons for Christmas 2 days ago. When we opened the brand new unopened box to play, we realised there were only 12 Green stores instead of 32......and NO Red Warehouses x 12

How do I find them? buy them? have them sent to me by the manufacturers who obviously didnt include them in the game?

Appreciate some help here....useless game without the proper equipment.

I play Monopoly Idle on my 2 home computers. Occasionally when I land on Just Visiting, the game sends me to jail. Is there any particular reason for this?

If you were not already aware, please read this blog post about changes that are coming. Specifically, the Forums, Message Walls, and Article Comments are being replaced by newer tools. For a detailed FAQ about the Forums retirement, see this post.

(edited by Moviesign)
If you pull a chance card that says "Advance token to nearest utility" does it mean the first utility going forwards or the closest one forwards or backwards?
(edited by PantheraLeo04)
Chance

Can't seem to find anything that looks organized and presentable -- beyond appearing as a hoarded mess.  It's a shame that tokens are made of pewter, otherwise they could rest perfectly on a magnetic surface.

Hoping someone out there is wiser than I am and has figured something out.

Would you be interested in receiving assistance with converting your infoboxes to the new portable type? They work much better on mobile devices, and over 72% of your page views come from mobile devices. Let me know if you'd like some help, or if you have any questions. —Moviesign (talk) 21:05, May 30, 2019 (UTC)

So when the chance card of a forced property trade is played, One player forces another to swap a property with them. If the forced player has a hotel on that property, what happens? The rule book says hotels may not be sold. Another rule says that if a chance or community chest card makes you sell or give card to the bank - that the hotel stays on the spot and the next player gets it for free. So can you force a trade and get the hotel with it? Or ..

With some hard work and investigation, I have discovered what makes Monopoly Tycoon crash when it starts up on Windows Vista and later. The Windows Media Source Filter codec was deprecated in Windows XP, and removed in Windows Vista. It is documented heavily on Microsoft's Documentation website in great detail. A manual installation guide is included on my blog in case the Automatic Installer (.bat file) doesn't work properly.

Here is a link to my blog post about how to install the patch/fix step-by-step.

Going to jail after passing through the starting point

I passed through the starting point and ended up at the luck card. The luck card sent me to jail saying not to get my 200. Since I only got the card after passing, should I get my 200 and go to jail, or only jail?